CNN: The pandemic has created a second crisis in India — the rise of child trafficking 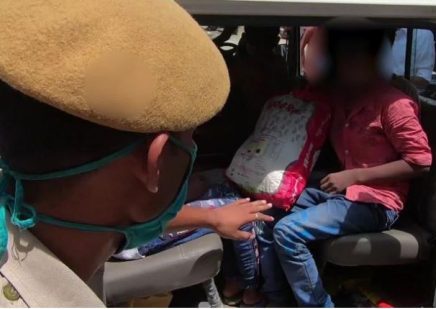 CNN: The pandemic has created a second crisis in India — the rise of child trafficking

One evening in August, a 14-year-old boy snuck out of his home and boarded a private bus to travel from his village in Bihar to Jaipur, a chaotic, crowded and historical city 800 miles away in India’s Rajasthan state.

He and his friends had been given 500 rupees (about $7) by a man in their village to “go on vacation” in Jaipur, said the boy, who CNN is calling Mujeeb because Indian law forbids naming suspected victims of child trafficking.
As the bus entered Jaipur, it was intercepted by police.
The man was arrested and charged under India’s child trafficking laws, along with two other suspects. Nineteen children, including Mujeeb, were rescued. Jaipur police said they were likely being taken to bangle factories to be sold as cheap labor.

In India, children are allowed to work from the age of 14, but only in family-related businesses and never in hazardous conditions. But the country’s economy has been hit hard by the coronavirus pandemic and many have lost their jobs, leading some families to allow their children to work to bring in anything they can.

Making colored lac bangles like those sold in Jaipur is hot and dangerous work, requiring the manipulation of lacquer melted over burning coal. Bangle manufacturing is on the list of industries that aren’t allowed to employ children under 18.

In recent years, India has strengthened its laws on child labor, but in the past six months — with Covid-19 taking a toll on the economy — that work has started to unravel.

“Children have never faced such crisis,” said 2014 Nobel Peace Prize winner Kailash Satyarthi, whose organization Bachpan Bachao Andolan (Save the Childhood Movement) works to protect vulnerable children. “This is not simply the health crisis or economic crisis. This is the crisis of justice, of humanity, of childhood, of the future of an entire generation.”

When India went into a strict lockdown in March, schools and workplaces closed. Millions of children were deprived of the midday meal they used to receive at school and many people lost their jobs.

Between April and September, 1,127 children suspected of being trafficked were rescued across India and 86 alleged traffickers were arrested, according to Bachpan Bachao Andolan.

Most of the children came from rural areas of poorer states, such as Jharkhand or Bihar. Pramila Kumari, the chairwoman of Bihar’s Commission For Protection Of Child Rights, said the government commission had received more complaints of trafficking during the pandemic.

Child trafficking, when young people are tricked, forced or persuaded to leave their homes and then exploited, forced to work or sold, can occur in several ways. Experts say sometimes, children are lured with false promises without their parents ever knowing, like Mujeeb. Other times, desperate parents hand their children over to work so they can send money home.

A laborer rests on the outskirts of Prayagraj en route to his village. With India’s rail network temporarily shut, many had no choice but to try walking hundreds of miles home.