FIP.AM: Mercenaries in the Artsakh war․ The sad experience of the Chechens and Mujahideens and the trafficking of Syrians 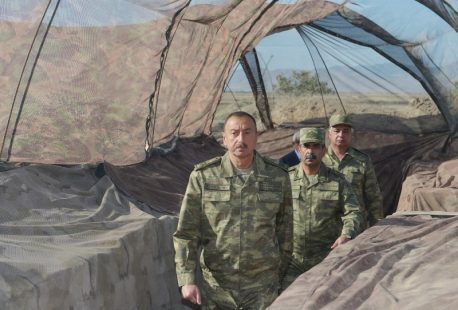 FIP.AM: Mercenaries in the Artsakh war․ The sad experience of the Chechens and Mujahideens and the trafficking of Syrians

In July of this year, in the days following the Armenian-Azerbaijani war in Tavush, rumors circulated about the recruitment of militants by Turkey in northern Syria. On September 24, days before the large-scale attack by Azerbaijan, two Syrian sources had already reported the transfer of militants recruited by Turkey to Azerbaijan.

Already in the first days of large-scale hostilities in Artsakh, a number of international media outlets began to publish evidence about the recruitment of Syrian militants. Speaking to two militants fighting in rebel-held areas in northern Syria under Turkish auspices, Reuters reported that 700-1000 militants were planned to be sent to Azerbaijan. Almost similar information was reported by The Guardian, which spoke with three men living in the northern Syrian province of Idlib, who were registered by a Turkish company for work in Azerbaijan. According to them, the recruitment started in August. One of the commanders of the “Sultan Murad” union under the protection of Turkey told them that there are jobs in Azerbaijan with a monthly salary of 700-1000 EUR for a period of three to six months and that they were supposed to control the oil and gas infrastructure there.

The British Public News Agency (BBC) has revealed that there are already at least a few killed and dozens of wounded among the recruited Syrian militants. Moreover, many of the militants are people with no previous military experience, who were actually trafficked by Turkey because they were recruited under duress.

The involvement of Syrian mercenaries in the Artsakh conflict by Azerbaijan has a long history. As early as the early 1990s, Azerbaijan recruited numerous Chechen and Afghan militants.

According to the Chechen “Ichkera” newspaper, the number of Chechen militants had reached 300 in June 1992. Among them was the infamous Chechen militant Shamil Basayev. In May 1992, he was one of the last people to leave Shushi.

The largest contingent of militants brought from abroad by Azerbaijan came from Afghanistan in late 1993. According to various sources, the total number of Afghan mujahideen fluctuated between 1000 and 3000.

According to a 1994 report by Human Rights Watch (HRW), Afghan mujahideen were recruited by Azerbaijani Deputy Interior Minister and Chief of Police Forces Rovshan Javadov, who traveled to Afghanistan to meet with Afghan Prime Minister Gulbuddin Hekmatyar. Most of the Mujahideen were from the “Hezb-e-Islami” union affiliated with Hekmatyar.

According to HRW, although Azerbaijan denied their presence in the military zone (and in Azerbaijan in general), Human Rights Watch met with Afghan militants in traditional military uniforms in several places in Baku in March-April 1994, including the backyard of the Ministry of Defense.

Moreover, in 1993-94, the Armenian side took captive some mujahideen, as well as documents in Pashto and Persian languages, which are the main languages of Afghanistan. According to HRW, the headquarters of the Afghan militants was located near the village of Baş Qərvənd in the Aghdam region.

In December 1994, the then Deputy Foreign Minister of Armenia Vartan Oskanian wrote in a letter to the Special Rapporteur of the UN Commission on Human Rights that the Afghan mujahideen had taken punitive action against the Azerbaijani soldiers who had left the front line.